This work is licensed under a Creative Commons Attribution-NonCommercial-NoDerivatives 4.0 International License.

It is my great honor to share hosting duties in the ongoing blog tour for Jim Webster. Today’s story is:

On occasion I ask myself whether Aea in her Aspect as the Personification of Justice has a rather dark sense of humour. Certainly there are times when I suspect I have heard her chuckle quietly as she deals with one situation and then turns to the next. Thus it was in the case of Madam Galathrong and her two daughters.

Madam had been married young, had her children young and then sadly, had been widowed young. Thus she had been left to bring up her two daughters, Alisen and Melisen on her own. To be fair her late husband had left her very comfortably provided, so they didn’t want for anything in a material sense. Her daughters were perhaps nineteen and seventeen when our story starts. Alisen, the elder, considered herself a writer and surrounded herself with literary figures. Melisen was, to be fair, a reasonable painter. Give her twenty years, let her feel the pangs of hunger, and she would have been driven to some good work. Still she threw herself into the society of painters (which is bad enough) but worse still, insisted on fetching them home and expected her mother to entertain them.

Thus Madam Galathrong found herself in a house overrun with ‘artists.’ At one point she might find her library infested with writers, her wine cellar ransacked by painters whilst their models posed decoratively naked in the fountains that formed the centrepiece of the gardens.

On one fine afternoon she had fled into Port Naain to seek peace and quiet away from her home, and there met Flontwell Direfountain. Flontwell she knew, a few years younger than her late husband, he had been a much valued family friend. She virtually kidnapped him, hustled him into a pleasant coffee shop and pleaded with him to rescue her, or at least help her restore order in her household. Flontwell, whilst a busy and successful merchant in his own right, promised to find time to help.

He was as good as his word, next day he arrived in person and was so naturally charming that over the next few weeks, visiting occasionally, he won both daughters over. In this he was helped by several things. He was erudite and perfectly capable of discussing art or literature. He was handsome, and being one of those men who doesn’t somehow seem to age, was perpetually in his mid-twenties. Finally he was wealthy. Those painters or writers whom he decided might be rivals suddenly received commissions to produce work which were both well paid, and alas, demanded their absence from Port Naain for a month or two.

To digress a little, it was never thus in the days of my youth. Back then, if a wealthy man felt that a poet was paying too much attention to his daughter, he’d merely send the butler out to hire a couple of heavies who would explain to you the error of your ways. We are indeed a sadly decayed people who have fallen far from our once lofty position.

Still Flontwell quietly worked his magic. He not merely managed to rid the house of artists and writers, but he paid gentlemanly attention to both sisters. He would take them to the theatre, to poetry readings, to concerts where the finest musicians played and even to the exhibitions of the best in modern painting.

The two young women delighted in him and each took pains to ensure that Flontwell spent more time with her than he did her sister. Indeed the rivalry grew so intense that they bickered over which of them would be the one to marry him. Hence, after some months of this, it came as a shock to both of them when Flontwell and Madam Galathrong announced their imminent wedding. If that wasn’t bad enough, less than a year after the wedding their mother provided them with a brother, a delightful baby boy who was named Melwell.
Fortunately for them, by now they were too busy to brood. Flontwell had used his influence to acquire paid employment for both of his stepdaughters. For Melisen he found a position working for Wullant Drew. The Drew family have an art gallery with an attached print shop where they make engravings of great works of art and sell the prints. Initially working in the gallery dealing with artists, Melisen had the task of rejecting the obviously unsuitable works and passing perhaps a quarter of the paintings submitted on to her superiors for a final decision. After six months of this, she was summoned to the office of Wullant Drew on a disciplinary matter. Apparently, she had lost patience with one ‘artist’ who refused to accept that his daubs had no artistic value whatsoever, and she had pursued him down Ropewalk, belabouring him with the pole used to hang paintings on the higher hooks. Wullant commented that having seen the paintings in question, he could sympathise with her actions. Still he felt that merely ejecting the perpetrator was probably enough. Still, mindful of the strain she was under in her job, he suggested she work in the engraving shop for a few months. Much to her surprise she was fascinated by the process and in the course of the next few months achieved a happy proficiency in it.

Her sister, Alisen, was harder to place. Whilst she lacked the depth of ‘lived experience’ to be a great writer, she did have a way with words. Indeed in thirty or forty years she could produce some great work. Still Flontwell felt he had to find her a position now. Finally he was talking to the miser and usurer Gumption Silvernant. Gumption mentioned in passing that he was looking for a clerk. Normally such positions would be wholly unsuited to Alisen, as the work they do is almost entirely numerical. But apparently Gumption has clerks whose sole task is to write strong letters reminding clients of the firm that they are in arrears with their payments. Flontwell suggested that this might be work Alisen could do. To be fair, she wasn’t entirely enthusiastic about it, but with the family home apparently to be filled with baby and associated nappies, Alisen decided that at least it kept her out of the house.

She took her place in the office, watched her colleagues at work and read the letters they had produced. Finally after a number of days of this, Gumption gave her clients of her own to write to. She wrote clearly in a fair hand and he had no complaints about her work. Indeed after she had been there six months he summoned the entire staff into the main office and with tears in his eyes he read aloud a letter she had just finished.

I forget now the details about payments owed and due dates. The clerk who told me the story couldn’t even remember exactly how much should have been paid and how much was overdue. But the bit he remembered was Gumption, with tears in his eyes, reading aloud the final sentences.

“Thus, if you do not pay the outstanding amount by the time the office closes three days hence, we shall be forced to take action. Unlike other, lesser finance houses who would at this point threaten you with muscular enforcers and physical violence, we at Silvernants eschew such practices. Instead we will be forced to hand your account over to our lawyers. They will not merely recover our monies but will strip you of everything you have ever owned, including your body and soul, and sell your children into indentured servitude to recover their own costs.”
The letter then apparently finished with a standard valediction, “Thank-you for doing business with us, your custom is important to us.”

And now it’s time to hear from Jim Webster.

So here I am again with another blog tour. I’ve released two collections of short stories from Tallis and if you’ve enjoyed the one you just read, you’ll almost certainly enjoy these.

So what have Tallis and I got for you? 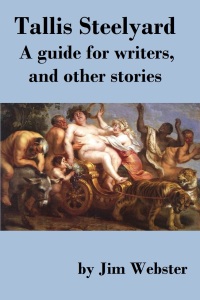 Well first there’s, ‘Tallis Steelyard. A guide for writers, and other stories.’

The book that all writers who want to know how to promote and sell their books will have to read. Sit at the feet of the master as Tallis passes on the techniques which he has tried and perfected over the years. As well as this you’ll have music and decorum, lessons in the importance of getting home under your own steam, and brass knuckles for a lady. How can you resist, all this for a mere 99p? 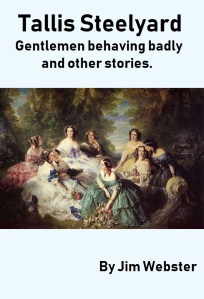 Then we have, ‘Tallis Steelyard. Gentlemen behaving badly, and other stories.’

Now is your chance to see Port Naain by starlight and meet ladies of wit and discernment. There are Philosophical societies, amateur dramatics, the modern woman, revenge, and the advantages of a good education.

So come on, treat yourself, because you’re worth it.

If you enjoyed today’s stories, and haven’t already done so, you should check out these other blogs. Make sure to doff your hat to the author and the host/hostess while you are there.

A man who doesn’t pay his bills never lacks for correspondence – July 15, 2019

Thank you for your kind shares, not to mention, the time spent supporting authors and bloggers.

I am an author-in-training wishing to spread my wings and test my abilities. View all posts by Ashlynn Waterstone